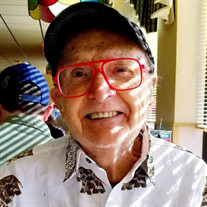 Russell “Pappy” John Hertzog Sr., 93, formerly of Germansville, died Wednesday, June 16, 2021, with his family by his side at home in Slatington, Pennsylvania. He was born November 1, 1927, in Allentown to the late Herbert and Viola (Hendricks) Hertzog. Russell was an Army veteran. He served from 1950 – 1952, stateside during the Korean War. Later, he worked at Durkee Spices for 19 years, taking an early retirement at age 59. He happily spent his retired years taking daily walks, eating at his favorite diners, making “friends on the computer”, and wearing flashy shoes. Russell was married to the late Mildred E. Hertzog (Beers), who preceded him in death in 1996. In recent years, Russell spoke fondly of reuniting with her once again in heaven. They are survived by their 3 children, Russell Jr., Lori, and David. Additionally, Russell is survived by 9 grandchildren, including Catherine Hertzog Nelson and husband William Nelson, with whom he spent his last 6 years. Russell also leaves a legacy of 6 great grandchildren, and a 7th expected in October. Services will be held 11:00 AM, Monday, June 21 at Trexler Funeral Home, 1625 W. Highland St., Allentown. Calling will begin at 10:00 AM. The family requests that guests forgo the traditional black attire and wear bright colors and prints like Russell enjoyed doing. In lieu of flowers, donations can be made to Lewy Body Dementia Association c/o the funeral home, 18102.

The family of Russell John Hertzog Sr. created this Life Tributes page to make it easy to share your memories.

Send flowers to the Hertzog family.