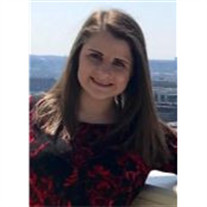 Makala Ashmar 29, passed away Saturday, September 5, 2020, after a valiant battle with cholangiocarcinoma, a rare cancer of the bile duct. Makala, daughter of the late Samir Paul Ashmar and Sharon L. (Miller) Ashmar, also the proud older sister of the late Sierra C. Ashmar, and Joshua A. Ashmar, was born in Allentown, Pennsylvania. Other survivors include grandparents, Rommy"Youmna" Ashmar and James M. and Deanna J. Miller. She was raised in Upper Macungie Township, where she attended Parkland High School and graduated with the class of 2009. The following fall she attended Bloomsburg University, where she earned her bachelor's degree, while majoring in political science and history. She also obtained a certification in public administration. She graduated with the class of 2013.After her time at Bloomsburg University, Makala accepted a position as an outreach coordinator and constituent services representative for Congressman Charlie Dent. After Dent's retirement, Makala accepted a managerial position with Lehigh Northampton Airport Authority as a properties coordinator. Makala was the recipient of many prestigious accolades throughout her life. She was a graduate of the Anne B. Anstine Excellence in Public Services Series, a program which trains women to be more effective leaders both in politics and in their communities. She was elected as the chairman for the Pennsylvania Young Republicans in January of 2020. In February of this year, Makala was named as one of Lehigh Valley's"40 Under 40" . Makala also worked as an advocate for Pete's Sake Cancer Respite Foundation, and was an ambassador for the Lehigh Valley Organ and Tissue Donation, as well as a member of the Spirit of Courage Cabinet Member for the Burn Prevention Network. Lastly, Makala was a lifetime member of the Girl Scouts of the USA, and was recognized with the"Take the Lead" award, an honor which distinguishes women whose leadership and achievements have strengthened their communities. Though the various awards bestowed upon Makala are impressive by any measure, they are infinitesimal when compared to the kindness of her heart. Those who were fortunate enough to be around Makala know that her every thought and action was made selflessly and with the utmost sincerity. Makala spoke her mind and told people what they needed to hear, both good and bad; it is this honesty that endowed her to the hearts of her friends and family, whom she loved fiercely. Makala had an unrelenting desire to support not only her loved ones, but her community as well. Her foray into politics allowed her to embody this desire, as she used her platform to become a role model for young women everywhere, symbolizing perseverance and great inner strength.Perhaps Makala's greatest trait was her ability to see the best in people, no matter the circumstance. Makala believed that people could change their life for the better regardless of how far they had fallen. She always wanted to see people achieve the very best versions of themselves, and she would do whatever she had to in order to help them get there. In the end, Makala died the way she lived. On her own terms, in her own way. She did not allow adversity to hinder her life, but instead accentuate it. She turned her battle with cancer into a force for good, raising money and awareness with which to fight the disease. Though she will be greatly missed, her impact on the world she left behind will be felt for years to come. She has left behind a legacy that those of us who loved her are unfailingly proud of.A celebration of Makala's life will be held at a later date when all her family and many friends may attend. In lieu of flowers a donation in Makala's memory may be made to Pete's Sake Cancer Respite Foundation 620 W. Germantown Pike #250, Plymouth Meeting, PA 19462.

The family of Makala Ashmar created this Life Tributes page to make it easy to share your memories.

Send flowers to the Ashmar family.