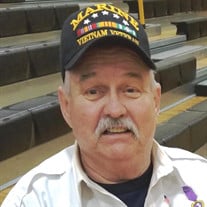 John A. Fuhrman, 72, of Orefield, passed away with his family by his side on Saturday, October 17, 2020 at St. Luke’s Hospice House, Bethlehem. He was the husband of Jeannette E. (Wilcox) Fuhrman, with whom he shared 40 years of marriage. Born in Columbia, PA, he was the son of the late Charles and Gwendolyn E. (Kise) Fuhrman. Since 1972, John worked at PPL for 30 years, beginning as a mechanic in transportation and lastly as a material handler, retiring in 2003. While at PPL, he assisted in the United Way campaigns for many years. John served his country in the US Marine Corps. during the Vietnam War, receiving many medals and citations, particularly three Purple Hearts. He was a member of the Military Order of the Purple Heart #190 Chapter. He was a lifetime member of VFW Post 7294, Millersville and a member of the American Legion Post 16, Slatington. He was a 32nd degree F & AM with Greenleaf Lodge #561, Allentown and a member of the Rajah Shrine and the Rajah Shrine Caravaners. He was a member of St. John’s Lutheran Church, Fogelsville. John coached his own children’s sporting teams at Northwestern Lehigh, he served many years as a Boy Scout leader, enjoyed fishing, and RVing with his wife. Mostly, he enjoyed spending time with his family, especially his grandchildren. Survivors: Wife Jeannette; son Jason T. and his wife Gina of Wescosville; daughter Jessica S. Moyer and her husband Douglas of Breinigsville; brother Kevin and his wife Tina of Holtwood, PA; grandchildren Christian, Cole and Addison, sister in law Bonnie of Lancaster, nieces and nephews. He was predeceased by brothers Brett and Chuck. Memorial Services with Military Honors: 11:00 AM, Saturday, November 7 at Trexler Funeral Home, 1625 W. Highland St., Allentown. Calling will begin at 9:30 AM. Private burial to follow at Indiantown Gap National Cemetery. Contributions can be made to the Shriners Hospitals for Children, c/o the funeral home, 18102.

John A. Fuhrman, 72, of Orefield, passed away with his family by his side on Saturday, October 17, 2020 at St. Luke&#8217;s Hospice House, Bethlehem. He was the husband of Jeannette E. (Wilcox) Fuhrman, with whom he shared 40 years of marriage.... View Obituary & Service Information

The family of John A. Fuhrman created this Life Tributes page to make it easy to share your memories.

John A. Fuhrman, 72, of Orefield, passed away with his family...

Send flowers to the Fuhrman family.