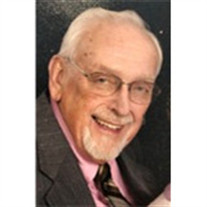 James H. Schubert, 87, of Allentown, passed away Friday, October 25, 2019 in his daughter's home. He was the husband of Shirley M. (Shive) Schubert, whom he married on March 21, 1953 and shared over 66 years of marriage. Born in Bethlehem, PA on November 11, 1931, he was the son of the late Richard M. and Helen (Radel) Schubert. Jim graduated from Bethlehem Vo-Technical School class of 1949. He was employed as manager of General Supply Co. in Coplay for 7 years, retiring in 1995; previously operated and owned S.J.E. Cards and Gifts, Bethlehem 1977-84 (with wife). Since 1996, Jim was a non-licensed resident staff member of the Trexler Funeral Home until earlier this year. He was a charter member, Past Distinguished President of the Kiwanis Club of Lehigh Valley Industrial Park, Allentown "" Bethlehem. Jim was also PA District Distinguished Lt. Governor of Kiwanis 1986-87. Jim was also Past Distinguished President of Kiwanis Club of Allentown Northeast. He was a member of the former St. Peter's United Church of Christ, Allentown, where he served as a former choir member, former Consistory President and former Financial Secretary.Survivors: He is survived in addition to his wife by sons Christopher and his wife Cheri of Wilmington, DE, David Scott of Trevose, PA; daughter Rebecca James of Palmerton; grandchildren Matthew and David DeHart; Elizabeth Schubert; step-grandson Kenneth Schuler; great grandchildren Noah Houtsch and Sarah DeHart ; step great grandson Harrison Schuler, Nieces and Nephews. Jim was predeceased by brothers, Richard and Charles, sisters, Elizabeth Brown, Marie Groom and Grace Borghi.Services: 11:00 AM, Saturday, November 2 at Trexler Funeral Home, 1625 W Highland St., Allentown. Calling will begin at 10:00 AM.Contributions can be made in his memory to Special Olympics or Kiwanis Club Allentown NE, c/o the funeral home, 18102.

James H. Schubert, 87, of Allentown, passed away Friday, October 25, 2019 in his daughter's home. He was the husband of Shirley M. (Shive) Schubert, whom he married on March 21, 1953 and shared over 66 years of marriage. Born in Bethlehem, PA... View Obituary & Service Information

The family of James H. Schubert created this Life Tributes page to make it easy to share your memories.

Send flowers to the Schubert family.