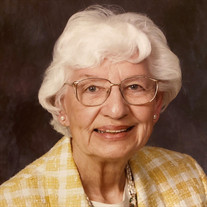 Dr. Vera Jean Krisukas, 100 of Allentown passed away peacefully November 10, 2020 at Lehigh Valley Hospital. Vera was preceded in death by her husband of 51 years, Broni G. Krisukas. She was born in Stroudsburg, Pa. on December 30, 1919 to the late Ellsworth and Leila Palmer. Vera is survived by her son Gene F. Krisukas and wife Carol, son Rodger D. Krisukas and wife Judy, daughter Lea Ann Graeffe and late husband Howard, and daughter Jane E. DePiero and husband James. She is also survived by her 9 grandchildren and 14 great grandchildren. Vera graduated from Penn State in 1941 and completed medical school at Temple University in 1944. In 1946 Vera started her own family practice; spanning over five decades her favorite part was welcoming new life into the world. Prior to her retirement in 1990, Vera served as the Medical Director of Health Services at Cedar Crest College from 1965-1984. She was a doctor to all and it wasn’t unusual for her to accept a tray of homemade baklava as payment for services. Dr. Vera Krisukas served as president of both the Medical Women of Lehigh Valley and the Lehigh Valley Academy of Family Practice. She was also a member of the American Medical Society, Lehigh County Medical Society, and the Allentown Hospital Medical Board. Vera believed in educating and giving back to the community. As a Girl Scout Troop Leader for over 16 years, she taught leadership and outdoor skills. Throughout the 80’s and 90’s Vera served as a board member on the Board of Directors for the Girl Scouts of Eastern PA, Planned Parenthood of Lehigh Valley, and the YWCA. She also was on the Advisory Committee on Sex Education and a lecturer in Lehigh County Schools. Post retirement Vera held various positions at Cedarbrook Nursing Home and Phoebe Allentown. Additionally she volunteered across the Lehigh Valley at many blood drives with the mobile Miller-Keystone Blood Center. Dr. Vera Jean Krisukas received several awards over the years culminating with the YWCA’s Women’s Leadership Award in 1991. Vera was also a Charter Member of Calvary Baptist Church of Allentown. Vera never let outside influences deter her active life style which included concerts, traveling all over the world, hunting, camping, skiing (until she was 89), hiking, and canoeing. She shared her love of the outdoors and the Delaware River with her grandchildren well into her 90’s. Dr. Vera Jean Palmer Krisukas had a life well lived. The immediate family will be holding a private service with a Celebration Of Life to follow in the Spring. In lieu of flowers, memorial donations may be made to YWCA, Planned Parenthood, Greater Valley Girl Scout Council, or Phoebe Allentown.

Dr. Vera Jean Krisukas, 100 of Allentown passed away peacefully November 10, 2020 at Lehigh Valley Hospital. Vera was preceded in death by her husband of 51 years, Broni G. Krisukas. She was born in Stroudsburg, Pa. on December 30, 1919 to the... View Obituary & Service Information

The family of Dr. Vera Jean Krisukas created this Life Tributes page to make it easy to share your memories.

Send flowers to the Krisukas family.