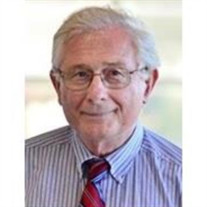 Dr. Charles D. Peters, 88, of Emmaus, passed away Tuesday, August 17, 2021. He was the husband of Barbara E. (Holland) Peters for 51 years. Born in Allentown, PA, he was the loving son of the late Dr. Ray F. Peters, and Anna L. (Weitknecht) Peters. He earned the rank of Eagle Scout in 1951 and spent two summers as a Ranger at Philmont Scout Ranch and was the Waterfront Director at Trexler Scout Reservation. He graduated from Allentown High School in 1950, Muhlenberg College in 1954, and received his medical degree from the University of Pennsylvania in 1958. He completed a residency in Internal Medicine at The Delaware Hospital in 1965. He was a Captain in the US Army Medical Corp from 1959 – 1961, served as the Commander of the Medical Battalion in Reykjavik, Iceland in 1960 and was a Major in the Delaware National Guard, 1962-1966. He returned to Allentown in 1966 and practiced in the Lehigh Valley for 55 years. Medicine was his life and passion and he was deeply committed to caring for his patients and community. Dr Peters practiced Internal Medicine with Medical Associates of the Lehigh Valley and was on staff at Lehigh Valley Hospital, was chief of General Internal Medicine 1974-1980, was a consulting physician for Good Shepherd, and was an Assistant Clinical Professor at The Medical College of Pennsylvania /Hahnemann School of Medicine and Penn State University. In 1972 he was awarded Teacher of the Year, Department of Medicine, Allentown Hospital. He received the Preceptorship for Community Based Teaching from American College of Physicians and in 1998 The Deans Special Award for Excellence in Clinical Teaching from the Medical College of Pennsylvania School of Medicine. He was elected to Fellowship in the American College of Physicians and the American College of Chest Physicians. He was a devoted life-long member of St James UCC where he served as a Deacon and an Elder of the Consistory up until his death. Charles loved his farm and riding the trails on his Tennessee Walking Horses. A highlight of his life was riding in the reenactment of the Liberty Bell Wagon Trek that brought the Liberty Bell from Philadelphia to Zion’s Church in Allentown for the Bicentennial celebration in 1976. He loved skiing, sailing and summers on the beach at Rehoboth and Block Island with his children and grandchildren. Charles was a true gentleman and a thoughtful, caring person who was dearly loved by his family and respected by all who knew him. Survivors: Charles is survived by his wife of 51 years, Barbara and his three children: Melinda Peters and her companion Roy Schaefer of Allentown, Dr. Charles D. Peters, Jr. and his wife Jennifer (Jackson) Peters of Emmaus, and Amanda (Peters) Kinney and her husband Brian Kinney of Wellesley, MA, as well as four grandchildren: Ethan Kinney, Charles Peters, III, Elizabeth Kinney, and Madison Peters. Services: A viewing will be held Friday, August 27, from 5 to7 p.m. at Trexler Funeral Home, 1625 Highland St, Allentown. A funeral service will be held Sat., August 28, 10 a.m. at St James UCC, 37 South 15th St, Allentown, followed by interment at Grandview Cemetery. Contributions: In memory of Charles, contributions may be made to St. James UCC, 37 South 15th St, Allentown, PA 18102. Condolences may be left at trexlerfuneralhome.com

Dr. Charles D. Peters, 88, of Emmaus, passed away Tuesday, August 17, 2021. He was the husband of Barbara E. (Holland) Peters for 51 years. Born in Allentown, PA, he was the loving son of the late Dr. Ray F. Peters, and Anna L. (Weitknecht)... View Obituary & Service Information

The family of Dr. Charles D. Peters created this Life Tributes page to make it easy to share your memories.

Send flowers to the Peters family.