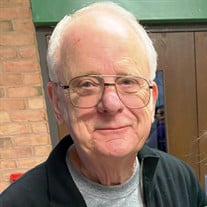 David H. Larkins Sr., 78, of Alburtis PA, entered into eternal rest on October 7th at St. Luke’s Hospital in Allentown PA. He was the husband of the late Lolly (Cornell) Larkins and the late Dorothy (Winther) Larkins. Born in St. Louis MO, he was a son of the late Howard E. and Lois H. (Crouch) Larkins. He attended Southwest Baptist College in MO, and then attained his Master’s Degree in Psychology from Penn State University. He worked for many years at the State Correctional Institution at Dallas PA, where he began as the Director of Treatment and was instrumental in starting the rehabilitation program, he completed his career there as the Prison Warden. David was a U.S. Army Veteran, attaining the rank of Staff Sargent. He served in Vietnam during the Vietnam war, working with Army Intelligence. Within the military and outside David was passionate in his support for the United States. He was active in various VFW Posts over the years, belonged to the Fraternal Order of Police. He enjoyed hunting all over North America and fishing in FL, where he stayed during the winter after retiring. He especially enjoyed making waffles for his granddaughters. Surviving is a son David Larkins and wife Michelle of Los Gatos CA, a daughter Melissa Larkins of Bel Air MD, a brother Gary Larkins of MO, and a sister Becky Kneip and Husband Dave, also from MO, and granddaughters Emily, Eliza, Charlotte and Sadie. He is also survived by his nieces Amberly, Keleigh, Brittany, Chloe, and his step-grandsons Jake, Nathan, and Zach. Memorial Services will be held on Saturday, October 16th at 11:00 from Trexler Funeral Home, 1625 Highland St., Allentown PA 18102. Luncheon to follow. Interment to be held at a future date at Jefferson Barracks National Cemetery in St. Louis MO. In lieu of flowers, contributions may be made to Cradles to Crayons Inc in support of David’s love of all things family related.

The family of David H. Larkins, Sr. created this Life Tributes page to make it easy to share your memories.