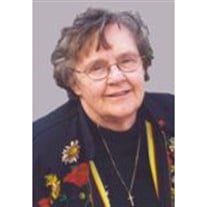 The tender step from her world of limitless family devotion to a more timeless level of love was taken peacefully by Annamarie M. Worthington, 88, of Allentown on January 23, 2020. Born in Allentown, she was the daughter of Nicola and Mary (Realo) Troccola. She was the much beloved wife of E. Donald Worthington who preceded her in life's journey after an extraordinarily fruitful marriage of 47 years. Ann was the valedictorian of the Class of 1949 at Allentown Central Catholic High School where she also lettered in varsity basketball. As the mother of 11 children (and matriarch of 60 family members plus spouses) her considerable organizational skills provided a balance between family affection and fiscal discipline. Her maternal responsibilities were abetted by pioneering the 1970s version of"Extreme Couponing" well before it became an icon of American retail culture. Her resourcing strategies empowered the Worthington Family an abundance of nutrition (weekly dinners typically included two dinner entrees, with the exception of the dreaded Fish Stick Fridays) and clothing ("her boys" were fashionably attired in the latest rebate merchandise couture), while still maintaining a modest revenue stream for double-card bingo. Her mathematical prowess devised a binary system for remembering all birthdays, anniversaries, graduations and other family events for every member of her family, which was executed thousands of times with flawless results. Though the retail giant Blockbuster video rental chain went extinct, Ann's movie rental business model flourished through her management of a proprietary library cataloging process similar to the Dewey Decimal System but with more compelling late fees for overdue returns. Quotable wisdom from her lips:"No boy of mine (fill in the blank)" ;"My boys are nothing like my girls" ;"Self your own help" and on the topic of cuisine preparation"Cook it through and through." Her love lives on in her children: Linda A. Orcutt (widow of Sinclair) and companion Gary; Nancy A. (Michael) Reilly; Kevin D.; Carol A. (Warren) Sarubin; Cheryl A. and companion Jack; Donna A.; Karen A. (Buddy) Merrill; Mark D. and companion Andrea; Nicholas R. and wife Roberta; Dennis R. and wife Melissa; and Robert D. She is survived by brother Dennis (Charlotte) Troccola and sisters Antoinette (dec. John) Farnschlader and Theresa Pinter. She was predeceased by her brother Nicholas.In addition,"Mom-Mom" was very proud of her 30 grandchildren; Jen/Nick, Natalie/Scott, Jackie, Angie, Eric/Megan, Chris, Matt, Arielle/Gerhardt, Beverly/Mike, Lee/Cara, Kelly, Chad/Jennie, Kelly/Chris, Chuck/Mandy, Megan, Ashley, Julia, Keri/Todd, Brad, and Aly; and 20 great grandchildren; Mason, Ben, Sawyer, Baby boy due in May, Ryan, Darren, Catherine, Cameron, Sammy, Emile, Jonathan, Hope, Luke, John Charles, Christopher, Charlie, Owen, Luke, Kate, and Emma; and 9 nieces and nephews, including Nicole (Matt) whom she considered to be a grandchild.Calling hour will be held Thursday, January 30 at 9:30 a.m. followed by funeral Mass at 10:30 a.m. at the Cathedral of St. Catharine of Siena, Allentown. Donations can be made in her name to a charity of donor's choosing. Human bodies wear out. But love like this lives on forever. "The door is always open."

The tender step from her world of limitless family devotion to a more timeless level of love was taken peacefully by Annamarie M. Worthington, 88, of Allentown on January 23, 2020. Born in Allentown, she was the daughter of Nicola and Mary (Realo)... View Obituary & Service Information

The family of Annamarie M. Worthington created this Life Tributes page to make it easy to share your memories.

The tender step from her world of limitless family devotion to...

Send flowers to the Worthington family.