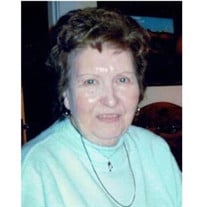 Alice C. Litzenberger (nee Dietrich) passed away on April 17, 2021. She celebrated her 100th birthday with her family in February 2021. She lived a long and happy life with wonderful memories of her family, her extensive career and travels. Alice was born in Tamaqua but raised in West Hamburg, PA. She attended Shippensburg College and was on the girls’ basketball and field hockey teams until Scarlet Fever forced her home to recover. The next year she transferred to Combs College of Music in Philadelphia graduating with a BA in Music in 1941. She then began her 75-year career as a private piano and organ teacher enjoying each of her students and being a part of their lives. She also stopped driving her car the same year, yes she was 95. Her students continued communications with her through letters and cards as they moved on in their lives. If they sent her pictures, she kept them as a remembrance. At Christmas she and her family would open the many gifts she received from her beloved students. She possessed an engaging personality and put everyone she met at ease with a vibrant smile and an open heart. As a young woman living with her parents, Anna and William Dietrich (both deceased); Alice was assigned the task of driving her father, William, to and from work. He was an engineer on the Reading Railroad and during World War II; she had to drive him to Tamaqua from their home in West Hamburg on country roads with no lights on at night for fear of alerting the enemy. She was built from steely determination which lasted to the end of her life. Alice was the organist and Choir Director at Frieden’s United Church of Christ in Lenhartsville, PA for 18 years before concentrating on her growing career of private teaching. A devoted follower of the Philadelphia Phillies, she would get so frustrated when they were losing, she’d turn them off and we would have to call her if they rebounded to turn them back on. Alice and her husband Donald Litzenberger (deceased) worked hard their entire lives and loved travel. They visited 39 countries as well as most states in the U.S. Donald owned many area restaurants including the Copper Kettle in Allentown and Bambi/Litzenberger’s in Whitehall. She also worked as a hostess at the restaurants in addition to her teaching career. Alice is pre-deceased by her husband Donald, her parents and her sister, Anna Derck. She is survived by her children, Alice Dalla Palu (Richard) of Cape May, NJ, Robert Litzenberger (Roberta) of Whitehall, PA, grandchildren, Michael Litzenberger (Suzanne) and Bryan Litzenberger (Renee) and 4 great grandchildren – Benjamin, Kathryn, Calvin and Paige. The family is extremely grateful to her caregivers in her final days: Carol, Charlotte, and Anna and the care provided by Family Pillars Hospice and Millbrook Homecare. We are also grateful to Alice’s neighbor and best friend, Dayle who became a devoted and dear friend the last years of her life. If you are able, come and celebrate Alice’s magnificent life with us at 11:00 am Thursday, April 22, 2021. Visitation will begin at 10:00 am.

Alice C. Litzenberger (nee Dietrich) passed away on April 17, 2021. She celebrated her 100th birthday with her family in February 2021. She lived a long and happy life with wonderful memories of her family, her extensive career and travels.... View Obituary & Service Information

The family of Alice C. Litzenberger created this Life Tributes page to make it easy to share your memories.

Send flowers to the Litzenberger family.